Langley's Owen Shenk to Row at US Naval Academy 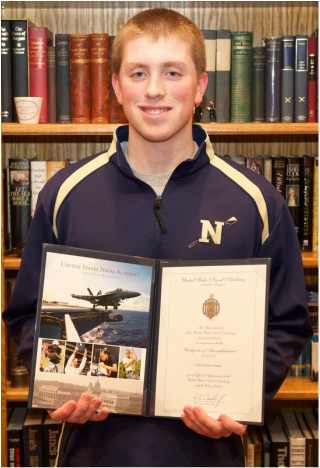 Langley High School senior Owen Shenk has been recruited to row at the United States Naval Academy. Following upon his commitment late in 2014, Owen received his congressional nomination from Virginia’s 10th Congressional District.

While at Langley, Shenk has excelled with Langley Crew including stroking the Men’s Varsity Four boat to a gold medal at Virginia State Championship, and a fourth place at SRAA Nationals last year. Following the Spring 2014 regatta season, he received the prestigious Washington Post All-Met Selection, and the Langley Crew Most Valuable Player award.  In addition, Shenk currently holds the record for the fastest rower (2K) in the history of Langley Crew.  As a team captain for the 2014-2015, he hopes to lead the team to another successful regatta season.

At the US Naval Academy, Shenk will row with the Navy Heavyweight Crew coached by Rob Friedrich.  The Naval Academy’s crew program is one of the oldest sports at the Academy – over 135 years – and one of the most distinguished rowing programs in the country.

Navy rowers have represented the US at the Olympics and Gold Medals in the 1920 and 1952 games. Since 1980, over 30 Navy rowers have been members of the US National Teams, including Olympic and Pan-Am Games representation.